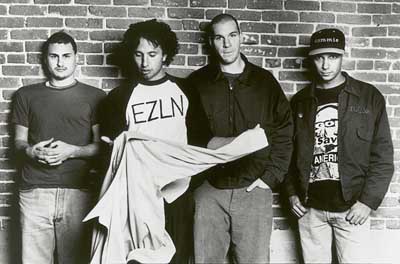 One of the most unique bands to have ever graced the music world, their style is like no others therefore imagine the excitement when cryptic messages appeared on the bands twitter, around various US cities and on a website named Prophets Of Rage. Most people thought a reunion tour, their first since 2011, or maybe even some new music?! 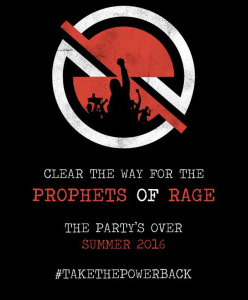 All signs now seem to be pointing towards a supergroup involving RATM members Tom Morello, Brad Wilk and Tim Commerford, Public Enemy’s Chuck D and Cypress Hill’s B-Real heading out on tour which may co-inside with election season!

Whatever the announcement may be, it has reignited my love for the band, and I’m currently in the process of revisiting a back catalogue full of incredible songs! Which got me thinking, what is the best Rage Against The Machine song….

So without further ado, this weeks Top 5 is: Rage Against The Machine Songs!

Taken from the bands cover album Renegades, in 2000, shortly after Zack De La Rocha had left the band, this song is a cover of Afrika Bambaataa from 1983. What is amazing about this track, and the whole album in fact is that each song, despite being covers, don’t feel like cover tracks. RATM make them their own, and RoF is no different. A brilliant song that never gets old! Because of Zack leaving the band before its release, this song wasn’t performed live by the band until an appearance at Coachella in 2007.

4. Killing In The Name

Obviously this is the most recognised RATM song, and was the track that got them that Christmas Number 1 in 2009. Now the easy choice would be to put this at number 1 in the list, but thats too predictable, however it can’t be left out of the top 5!
A Song that features as the lead single on their debut self titled album, and what a way to start! Rumour has it that Tom Morello created the guitar riffs for the song by accident whilst teaching a student how to play guitar… I bet that student tells that story everyday!

3. Sleep Now In The Fire

An incredible song, and even better video. Taken from the Battle of Los Angeles album as the second single released, this song may be more known now for causing altercations outside the New York Stock Exchange when shooting the music video for the song. Which I guess is what happens when you combine one of the most controversial bands, with one of the most controversial film makers, Michael Moore.
Rightly so this video was nominated for an MTV Video Music Award in 2000, but lost (somehow) to Limb Biskits Break Stuff… which them prompted bassist Tim Commerford to climb up the set and stage a protest!

Probably the RATM song I know the most words to, which is a difficult feat when it comes to Zack De La Rocha’s vocal parts! Its by far the stand out track on the 1996 album Evil Empire and its the song I feel best highlights the guitar skills of Tom Morello and the incredibly unique style he plays. Add that the bass solo from Tim, drum work from Brad and the brilliant verses with Zack and it all adds to an incredible song, easily one of the bands best!

It was a very difficult list to put together because of my love for a lot of RATM songs, but the easiest decision was which track was number 1. Know Your Enemy, for me, stands head and shoulders above all overs. It is 5 minutes of pure genius, with the impact of that first note, followed by the guitar riff intro and then the offbeat drum rhythm, and then without warning it changes direction and works. You would think being on an album alongside Killing in the Name, Bombtrack and Bullet In Your Head it would be overshadowed, but it totally isn’t. It never gets old and gets you pumped everytime. What a song, made even better by the live performance, which for me was one of the best live music moments I’ve ever experienced.. Finsbury Park, 2010

Obviously this list is all personal opinion, and chances are because of RATM’s incredible discography you will disagree somewhere down the line!